While cooking dinner the other night, Ethan my handsome 4 year old son  comes running into the kitchen “Mommy, Mommy I need some paper and a pen” my automatic response was going to be  ‘Not right now Ethan mommy is cooking’… (last time he was let loose with a pen while mommy was cooking my closet door got a new tattoo thanks to my son’s creativity) that is until he said “Mom I need some paper so I can write a letter to Auntie Diana, she loves me so much!” So I caved (I usually do he is just too darn cute!) I found a note pad and pen in the junk drawer and set him up at the kitchen table and went back to cooking while he sat at the table intently writing his letter to Diana. When dinner was ready I asked him what he wrote in his letter to auntie Diana, to which he replies “The letter L” I laughed  and asked “Just the letter L?” and he looked at me and said “Mommy the Letter L is for Love because I LOOOVVVEEEE my Auntie Diana.”  heart melted, tears welling up in motherly pride. He LOVES his Auntie Diana! We sent her the note in the mail the next day with a note from me explaining what the Letter L meant. When we received a phone call from my sister uglier a couple day’s later Ethan was over the moon that his Auntie received his note. 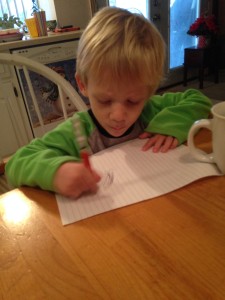